RPCs appearing as white rectangles and file cannot be saved

Two issues that may or may not be related:

1.  In the attached ACA 2014 file, in the current walkabout view, a line of RPC trees appears as white rectangles when rendered, instead of as trees.  (If a bunch of RPCs are erased elsewhere in the model the problem does not appear.  The problem also disappears in other views.)

2.  After opening nXt and rendering, upon returning to ACA2014, when trying to save the dwg file, this appears:

After performing a few undos it is possible to save without getting the message.

The RPC problem is similar to the widespread
one I had when the model was far from the origin, but now the model is at the origin.

I have repeatedly purged and audited - though Audit takes a relatively very long time.

It seems I can sort of work around this but any help here would really be appreciated.

It certainly seems like an RPC issue.  I can't check very easily-- I'd need to get a hold of all of the RPCs in the drawing.  Audit does seem to take forever which does suggest that something else is wrong here (running it now.)

i think it has something to do with the way nXt interacts with RPCs because the problem does not appear when using ACA's native renderer.  Yes the long audit does suggest a problem with the file...

No doubt-- we've had some occasional reports about things going weird when a lot of RPCs are used.  It's difficult to debug and there may not be much I can do anyway without Archvision's help.

So how can we proceed Roy?  Are you in contact with Archvision?  Should I contact them?  We're currently doing fairly large scale urban design and I can't reduce the number of trees - if anything I'll be adding more.

I'd much rather work with nXt and have configured the materials for it, but I guess if there's no choice I'll rework everything and revert to ACA's native renderer.

Please let me know if you think it likely these problems can be solved soon since my nXt trial is about to expire, and there's little point in upgrading my old nXt license if I can't reliably use the application for my purposes.

Thanks very much for your help on this.

OTOH lots of people are using nXt for larger projects with success-- including the use of RPCs. This drawing obviously has something wrong with it and should probably be cleaned up by using wblock or something similar (without the RPCs, initially) and inserting them one by one.

You can try substituting nXt trees for the Archvision ones.  There isn't a whole lot of penalty for using these, particularly with the Hybrid engine (recommended).

Well, it is definitely worth the effort in making it work and it is encouraging to know that people are using nXt for larger projects.

Do you have any clue what is causing that save error message after rendering with nXt?I'll wblock out everything, though I've already done that once before with this file.

Instead of having the RPCs on a separate layer I've xrefed them altogether - BUT if there isn't much penalty using nXt trees I'll definitely try that and limit the use of RPCs altogether.

There are a couple of issues that could be contributing to the issue your are having with this file. The shadow and reflection settings are not set the same for all of the RPC's in the file. I did not check the trees with the issues and just set them all to shadow and reflect.

The second, and probably the cause of the render and save issue, is that one of the materials of the RPC's is doing something goofy (that's my technical term!). I, too, had trouble saving the file. I just purged the RPC materials and it saved just fine. Be reminded that the material will 'reload' every time you render. So you'll have to purge before every save or replace the defective RPC.

After purging, the file rendered and saved just fine. The render attached has all of the RPC's in one file. 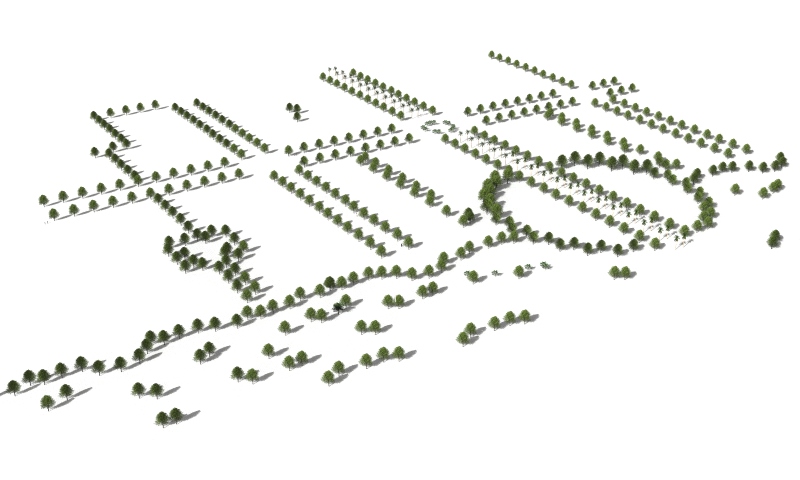 Well, I turned on all shadows and reflections: Then I tried purging all the RPC materials but they still appeared in the purge materials list even after purging.  Any idea why they won't purge even if they are on the purge list as available for purging?

I then tried rendering and still got white rectangles and could not save.

By "all of the RPC's in one file" do you mean they are in a separate file attached as an xref?

Any idea how to determine which is the goofy material?

Thanks very much for your help on this.

Yes, the RPC materials will 'reload' every time you load the model in nXt to render. So purging them is only temporary.

I would definitely try a new file as the one you've uploaded has something strange going on with it. The render I uploaded was made from a new file with the RPC's copy/pasted into it. I do not get the save issues with the new file.

I have no idea how to determine which RPC is bad or which material is giving the trouble. That's going to be determined by trial and error I believe.

I'm attaching the new file I made so you can see if it will render on your end.

Yes, the RPC materials will 'reload' every time you load the model in nXt to render. So purging them is only temporary.

I would definitely try a new file as the one you've uploaded has something strange going on with it. The rendering I uploaded was made from a new file with the RPC's copy/pasted into it. I do not get the save issues with the new file.

I have no idea how to determine which RPC is bad or which material is giving the trouble. That's going to be determined by trial and error I believe.

I'm attaching the new file I made so you can see if it will render on your end.

Your file does render correctly at my end, thanks.  I guess I'll have to go back to creating a Wblock from the whole file - and use nXt plants wherever possible...

That is very strange, but it doesn't surprise me if you are trying that in your original file. I think you best option is to start with a fresh file like you've mentioned. Good luck!

Rich Hart replied to Brittany Watson's discussion Continuous Recessed Lighting Issues
"I see that if I turn the soffit layer off, that those can lights on the right are working. So I assume the soffit is blocking the light. Unfortunately, I'm not able to try moving the can lights down for some reason. I can try looking into this…"
yesterday

Brittany Watson replied to Brittany Watson's discussion Continuous Recessed Lighting Issues
"I apologize, they are the smaller can lights on right soffit side of the arched ceiling, the bigger ones on the opposite side (left) are working correctly. They do work when the light source is pulled out of the can object or out of the soffit, so…"
yesterday

Rich Hart replied to Brittany Watson's discussion Continuous Recessed Lighting Issues
"Unfortunately, the model was still just too large for my machine. After about 15 minutes I had to turn off the computer so that I could do something else while it was rendering.. Could you give me any idea of where the lights are that don't…"
yesterday

Rich Hart replied to Brittany Watson's discussion Continuous Recessed Lighting Issues
"Can you send us a model where this is happening, to see if we can duplicate it here? As small a model as possible would be appreciated. You can use this link to send it to us: https://renderplus.com/wp2/uploads/ Thanks, Rich"
Wednesday

Hi I use AutoCAD Architecture and have been having on going problems with a recessed can light block. I have completed 3 renderings now in which I have had to spend days trying to get my recessed lighting to work. Other lights work, and occasionally some of the can recessed lights will show up. I have exploded the block and added them individually, I have aimed the light and rotated it every which way, but most of the time nothing works.  I have tested out the problem on my current rendering…See More
Wednesday
5 Comments

Roy Hirshkowitz replied to Peter Milner's discussion Accurender Studio cloud rendering
"I pulled the option to use my Azure Batch cloud out of the current product.  There wasn't much interest in it.  You can set up your own Azure account with Microsoft and use it, it's not trivial but also not too hard.  I…"
Feb 21

How much does it cost to use cloud rendering?See More
Feb 21
1 Comment